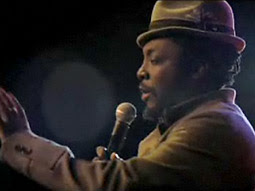 Pepsi with Will.i.am will be placing an ad to appear immediately after the singer presents a Grammy award.

Pepsi has made certain that after singer Will.i.am presents an award Sunday evening, a special "bumper" featuring the rapper's likeness will appear, then segue into a recently launched Pepsi ad featuring both Will.i.am and Bob Dylan. By arranging for the ad to appear immediately after Will.i.am will be on the screen, Pepsi hopes in this way to make the commercial more relevant to the viewing audience.

For decades, marketers ran their ads on TV by requesting placement that wasn't any more specific than Thursday prime time, or during a specific part of the day, or sometimes against a specific show. Now, with more consumers not just going to the refrigerator during a commercial they are fast-forwarding past the commercial breaks and with the economy wreaking havoc on the ad business, networks are willing to change their practices to guarantee that ads appear in more-specific places and for more-specific purposes.

At Pepsi, there seems to be a definite push to use network shows to whet consumer appetite for a particular commercial, rather than just peppering viewers with the same ad over and over again.

The people who manage the Grammys are known to guard the integrity of their show, awards, and property. These days, however, with networks' live ratings in dropping and marketers' ad commitments in flux or even being canceled, allowing ad tie-ins like this can mean the difference between lost revenue, found revenue and saved revenue.

Or course lets us not forget that in the aiding of the transition from awards-show moment to Pepsi plug is the fact that Pepsi’s advertising agency of record, TBWA also serves as the Grammys' ad agency. The ad shop has created a promotion for the awards program showing celebrity faces made out of the words of songs that have influenced them. Will.i.am's face, built out of song titles, will be seen during the "bumper" between his on-air moment and the Pepsi spot.

Larson note: You do what you got to do. Money talks and revenue in a down turn is increasing important so why not push the buttons and pull the levers of progress. If you had a record shop wouldn’t you use a “friend” who is well known? Do you? If you had a shoe store and could get a “friend who is not a well know actress to wear a pair of your shoes would you? Should you?

Now might be a good time to call in that favor.

P.S.S. If you are in Credit Cards I have just signed up the services of an EXPERICENED merchant service salesperson. Interested in using him, call today.

*Source: Brian Steinberg, Ad age
Posted by Larson and Associates at 11:34 AM