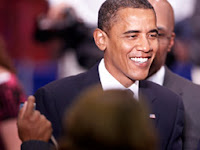 According to the latest data from the consumer-research firm Davie Brown Entertainment, President Barack Obama has displaced Academy Award winner Tom Hanks as the nation's most influential celebrity.

For the last two years, Mr. Hanks has ranked atop the Davie Brown Index (DBI), an independently conducted survey that brand marketers and advertising agencies use to determine a celebrity's ability to influence consumer brand affinities and affect purchasing decisions.

Of the eight key attributes, Mr. Obama ranks first in four of categories: "trust," "influence," "trendsetter," and "breakthrough." The president also ranks second in terms of "aspirational" ratings, which reflect the degree to which respondents felt the celebrity has a life to which they would aspire, behind only Microsoft founder Bill Gates.

Ironically, the president ranked fifth in the index's "endorsement" category, which reflects the degree to which consumers identify the celebrity as being an effective product spokesperson. In that category he finished just below Oprah Winfrey, the talk-show host whose October 2007 endorsement of Mr. Obama paved the way for his presidency.

Even more intriguing about the most recent Davie Brown Index is that eight of the top 10 highest-regarded public personalities in America are African-Americans: After Messrs. Obama and Hanks, the list is rounded out by actor Will Smith (No. 3); Michael Jordan (No. 4); Morgan Freeman (No. 5); Denzel Washington (No. 7); Michelle Obama (No. 8); Oprah Winfrey (No. 9) and Tiger Woods (No. 10).

In fact, the only other white celebrity to crack the DBI's top 10 was George Clooney, clocking in at No. 6.

Ranking over 1,000 celebs, the DBI is powered by a 4.5 million-person research panel, and is published four times a year.

Larson note: For years getting and having a celebrity to endorse you or your product has been the norm. How much people really pay attention to this I sometimes wonder, but then I am a cynical old man. Yet, if you had a celebrity you could use to promote yourself would you?

Sadly (not) I do. In my coaching and training business I am not ashamed that on one of my sites I have has a picture of me with Olympic runner and Illinois great,
Craig Virgin.

P.S.S. If you are in Credit Cards I have just signed up the services of an EXPERICENED merchant service salesperson. Interested in using him, call today.