According to Facebook there are now only 4 degrees of separation in the world. And you know they might be right.


For years, there's been a theory that every person is only separated by six degrees, or relationships. I found it sometimes hard to believe when one year when not thinking hard I found that I was only 3 degrees of separation from the President of the United States. Like WOW!


Then in comes Facebook, with its data of over 700 million people and their al their relationships and interconnections with friends. Facebook is saying we're all just four degrees of separation apart. Below you can see how many degrees, or "hops" apart people are around the world. 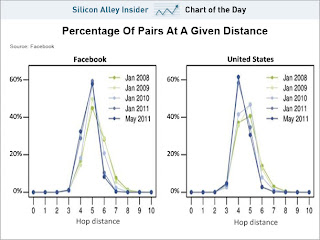 ﻿
Posted by Larson and Associates at 7:03 AM No comments:

As a lead generation – telemarketing company we are in a constant dilemma as we shift though and search for prospects, leads and customers for our clients.


We are suppose to be the miracle workers, finding golden nuggets where normal sales people cant or aren’t able to.


It’s a not nice world out there. We don’t always get want we want nor are we able to get the desired result we are looking for.


That is why I love the rule of #2. The rule of number 2 states that every account is already owned by someone. Muhammad Ali after fighting Joe Frasier once said “You got to beat the champ, you don’t just trade punches you go to beat him.”

In the land of Customers and Prospects maybe what we should expect more is engagements. Yes that might be lowering our expectations but we need a legitimate place to start the dialogue to becoming a customer. Don’t think I am trying to lower the bar on my work expectations. No, what I am saying is that we are going after the bull’s-eye but when we do find a company willing to start the engagement process that is not a lose.

It is far better to have a prospect you are engaged and conversing with than no conversation at all. Your real problem is to be able to measure the level of conversation. As long as you are communication with the prospect you have or should have some level of progress along the sales cycle. And while there is no true gauge for measurement every marketing and sales program should have distinct goals.

So what is a successful engagement? Is in increased sales? That would be nice and very trackable. Is it responses? Again very trackable and countable. As we move though the sales funnel we start to define more specifically if this is a quality lead or a “tire kicker”. An email campaign, direct mail program, all help to keep you in front of and on the mind of the prospect. I would hope you are in for the long term and not a one close, one sale wonder. Email, direct mail, social media marketing are areas of engagement or continuing engagement. It is keeping the flow of conversation going until you not just bid on a job but get your first sale.

The number of channels you can engage prospects is ever growing. Not just Facebook, LinkedIn or Twitter but MerchantCircle, Storeboard and the ning sites to name a few more. It is getting more complemented in some ways which it is important you keep track of what works and what does not work.


Larson Notes & Satire: Telemarketing can only take you so far down the sales process. Sure sometimes we get quote specs off a cold call right over the phone, we get appointments, but sorry more often than not we get companies in the ball game for them to do the job of closing the deal.


We have created a program that some companies follow and some don’t. Their choice of course. Most sadly take only a part of the entire program so they don’t receive the full benefit.


P.S. We make telesales for small business affordable by offering programs down to only 15 hours a week. Maybe you could add telesales into your marketing mix call today and find out.
Posted by Larson and Associates at 7:12 AM No comments:

I have been playing a little bit, a very little bit with Yelp. It is not my main push as a marketing tool that being a B2B company but still I play just in case I have a client that needs to be there.

But how long will Yelp be around? Does it, can it make money? 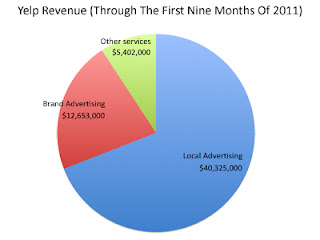 The company lost $7.6 million through the first nine months of the year on revenues of $59 million. They (industry experts) think if should become profitable, it will be due to advertising, specifically local advertising, which stands at at $40 million and is 70% of its total revenue through the first nine months of this year. Brand advertising stands at $13 million is 22% of revenue. And "other services," like Yelp Deals, remnant ads, and revenue from reservations is 9%, or $5.4 million.


Here are the most important details:


Visitors: Yelp had 61 million monthly unique visitors as of the end of its third quarter.


Reviews: Yelp has 22.4 million reviews on the site as of the end of its third quarter.

"Google in particular is the most significant source of traffic to our website accounting for more than half of the visits to our website from Internet searches during the nine months ended September 30, 2011," the S-1 filing reads.


And here are some interesting tidbits:

Nearly half of all reviews (23 percent each) are restaurant or store reviews.


Yelp's business could be adversely affected by "earthquakes, fires, floods and other natural catastrophic events and to interruption by man-made problems such as computer viruses or terrorism."

Yelp says it does not intend to pay dividends in the future.


Larson Notes & Satire: My yelp numbers are going up? Are my prospects there? Yes, prospects can be everywhere. It is all in how to touch them in a way they want to be touched.


As Henry Ford once said, he knew half of every dollar he spent on advertising was wasted. He just didn't know which half.


So where should you be advertising and marketing everywhere and anyway you can be 90% effective. The key is to be as effective in each area you are involved in so you own that channel. A multichannel attack works because one size or one approach does not fit all. Need help call us.


P.S. We make telesales for small business affordable by offering programs down to only 15 hours a week. Maybe you could add telesales into your marketing mix call today and find out.
Posted by Larson and Associates at 7:34 AM No comments:

With so much emphasis being focused on Social Media Marketing these days it is easy to under estimate the power of the phone for establishing deep long lasting customer relationships.

What I think you need to remember is that of all the channels you can use for Marketing, Cold Calling is still one of the FEW ways if not the only way to be proactive in your marketing attack. Everything else waits for the prospect to contact you! With cold calling you go out and contact the prospect. In addition it is one of the only marketing tools that will give you an instant two way conversation with your prospect to allow you to secure a long lasting relationship.


So here are 5 ways to set up and focus yourself on attaining desired cold calling results:


1. Define your criteria. In any sales and marketing attack you need to define your target as narrow as you can. The more specific the better. Narrow nitch yourself


2. Have a preset agenda. You need a road map to get where you want to go. If not a “script” have an outline of where you would like to guide the conversation towards. Use open ended questions (how many times have you heard that?) and pointed questions. Might as well find out if their needs are real and what their time table is on your product or service. 1 day, 1 week 1 month 1 year, ask and find out.


3) Keep it relevant. To be effective you need to be relevant to the prospect. If it’s not important to them they will not care. So before you pick up the phone ask yourself, Why am I calling and why should they want to hear about it. If you cannot answer this question, you might as well not even pick up the phone in the first place and go on making that paperclip chain.


4. Have a voicemail strategy. Ya sorry but you got to figure that at least 75% of your calls are going to voice mail. That is just the way it is. Have a 15 to 20 second voicemail advertisement ready to go. If they want it, if they need it, they will call back.


5. Integrate your marketing channels. As a standalone you can and will get activity off your telemarketing attack but… if you can put it together with a planned multichannel attack you up your odds of success. You give them ways to approach you that they might find more suited with their nature.


Larson Notes & Satire: Telemarketing works cold calling works that is why we do it. If it didn’t people would not pay us to pick up the phone on their behalf and make the calls.


P.S. We make telesales for small business affordable by offering programs down to only 15 hours a week. Maybe you could add telesales into your marketing mix call today and find out.
Posted by Larson and Associates at 7:36 AM No comments: